While Liesl is in the bathroom the rest of the kids gradually pile into Maria’s room. They are all scared of the thunderstorm. Maria tells the kids that when she’s scared, sad and otherwise distressed she thinks of nice things in order to feel better. Louisa and Marta (two younger daughters) ask “What kind of things?”. Why oh why did you do that, girls? Now Maria will probably invent a song to…yup, she’s doing it. Maria sings a song about her “Favourite Things” and how they help her through tough times. Here, in no particular order, is a non-exhaustive list of Maria’s “favourite things”:

If you look at that list carefully, you may notice that something is a bit off. Let me help you figure it out – it’s fucking nuts! That’s an oddly specific list of freaking random stuff. There’s no way those are any sane person’s most favourite things! It’s more of a “list of items found inside the apartment of that crazy old lady who talks to her cats”. Come on Maria, you’re just making this shit up on the spot, aren’t you? The kids, of course, love it. Then again, they haven’t heard singing in years, so at this stage Maria may just as well be making random high pitched noises. Everyone joins in and adds their own favourite things to the list.

As fate would have it, the Captain walks in on all of this fun. Unsurprisingly, the kids are immediately sent off to bed. The Captain once again reiterates to Maria how important order is in his house. He expects her to maintain discipline while he’s in Vienna. Maria makes another feeble attempt to ask for material to make “play clothes” for the children. Her request is denied, again. After the Captain leaves Maria gets an exciting idea. Remember those old drapes that are to be replaced by new ones? In a shocking twist that nobody could have predicted Maria decides to make clothes for the kids…out of drapes. Notably, she wants these “play clothes” to replace the depressing matching uniforms the kids are otherwise forced to wear. Do you know the one thing that is more humiliating than wearing matching uniforms? It is wearing matching green clothes with a flower pattern…made out of fucking drapes! 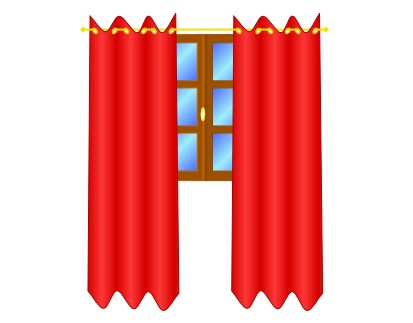 Where you see curtains, Maria sees her next cocktail dress!

The next day we see Maria leaving the manor with all of the kids in tow. The children are wearing green curta…ahem, clothes. For some inexplicable reason they’re all absolutely thrilled about it. Next we’re treated to a series of scenes where Maria and the children carelessly run across busy intersections, throw fruit around without having paid for it and are generally all kinds of reckless. A minute of movie time has passed since the Captain asked Maria to maintain order in his absence. For fuck’s sake Maria!

Maria and the drape-wearing gang finally end up on a meadow where they throw a picnic. Here the kids shock Maria by telling her that they don’t know any songs and don’t even know how to sing. Liars, all of them. First of all, they’ve heard Maria’s “Favourite Things” song just yesterday. Secondly, Liesl spent her entire time with Rolfe last night on a drawn out song and dance routine. Maria decides to right this horrible wrong and teach the kids to sing. She achieves this by creating yet another song right on the spot. In this song the kids have to literally sing out music notes. We’re treated to yet another collage of scenes spawning across several days, during which the kids get increasingly better at singing this one single song.

Then we cut to a separate scene (some days or weeks down the line) of the Captain returning home in his car. Together with him are Baroness Schraeder and the infamous Uncle Max. We quickly learn from Max himself that he’s a leech and basically lives off of rich people that he knows. Also, he’s looking for a singing group that he can promote at the Salzburg Folk Festival, so that he can make money of it. Sounds like a great guy to hang out with. 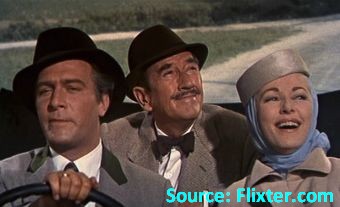 Max in the back seat, caught thinking of money again. Guess we know what HIS “favourite thing” is.

The movie skips to an outside scene at the manor. The Captain and the Baroness walk around and chat about their relationship. The Baroness not-so-subtly hints that she’s unattached and looking to get married. Meanwhile, Max is stuffing himself with strudel on the veranda. Von Trapp deduces that Max is eating because he’s unhappy, although a far more obvious answer is that Max can’t control himself around free food. The Captain wonders where the kids are and walks off into the house, presumably to search for them. While he’s gone Max interrogates the Baroness on whether she’s managed to convince the Captain to marry her yet.

On the other side of the house the Captain sees Rolfe throwing pebbles at Liesl’s window. Caught red handed Rolfe does what any one of us would do in that awkward situation  – gives the Captain a Nazi salute accompanied by “Heil Hitler”. The Captain is not amused. He tells Rolfe to get out, which the boy does after handing a telegram to Uncle Max. This prompts another discussion between the Baroness, Max and Von Trapp about the impending fate of Austria and the Captain’s views on Nazi Germany. He voices his disapproval of the Nazis, which is quite rich coming from a guy who runs his house like a military camp and makes his own children march to the sound of a whistle.