Today I bring you a post by Warren Kings, who talks about some famous characters with eyesight problems. Enter Warren:

Throughout the fantasy world, visually impaired characters feature in some strange roles – often involving vast amounts of mortal combat. In the real world, our visually impaired heroes are mostly artistically or scholarly inclined. You wouldn’t really encourage Helen Keller, Stevie Wonder or Roosevelt to get your back in a bar fight (or if you did you might deserve to lose that fight) but in the fantasy world being nearly blind means kicking extra ass – bonus.

Ancient Greece believed that the Cyclops and his brothers were the product of a one night stand between the sky and the earth (or Uranus and Gaia). I can’t imagine the exact pick up line the sky must have used, since the “did it hurt when you fell from heaven” one was clearly not going to cut it, but somewhere along the line the Cyclops popped out and the sky was sued for maintenance.

Clearly the sky and the earth are first cousins, because their sons came out with a single eye in the middle of their head, thus ruining family photos forever. These guys did, however, have the required depth perception to fight gods, smite villagers and (if the rumours are to be believed) dance the Macarena. 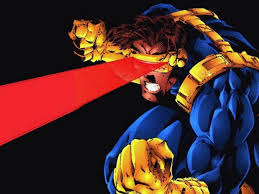 Cyclops from the X-Men

During a particularly energised round of weed smoking, the leader of the X-Men developed some serious red eye, which industrial strength eye drops failed to cure. He soon discovered that he could no longer walk around without protective ruby quartz sunglasses.

Many superheroes in the community accused him of doing this to himself on purpose so that he could have an excuse to wear shades indoors without being labelled as a tool bag. Despite the power to blast anything he’s looking at, Cyclops still manages to miss a lot of the time, but his hand to hand skills are still pretty impressive for a guy whose eyes are always on fire. 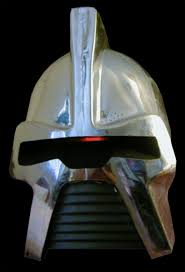 The Cylons of the different Battlestar Galactica series have had many differing origin stories, but the truth is a simple matter. They were, in fact, created by a race of bastards who wanted to see what would happen if you built a robot, programmed it to kill humans – and then gave it a single eye which bounced up and down in it’s head.

The Cylons, however, managed to impress everyone by actually shooting at least two people throughout the series (maintaining a better kill ratio than stormtroopers) – pretty impressive when you consider that their eyeball is on its own mission playing Pong. Although only a sideline character in the original Birdman series, Phil becomes super rich and powerful while being ultra successful at whatever he chooses to do – most of which can’t be repeated here. After spending his youth partaking in activities like using a blowtorch without goggles and pulling a bus with his left eye, he finally lost it to a paperclip in the office.

That hasn’t slowed Phil down though as he claims lost magical islands, survives being hit by moving traffic, drives over women pushing prams, fires tank shells at monsters and goes hunting for Harvey Birdmen with shotguns – all pretty impressive for a guy with no depth perception.

Once an avid reader of comic books, Warren Kings is now an experienced content writer who spends his free time saving up ‘seriously considering’ iLasik surgery and dreading the future possibility of cataracts.