This also means that I probably won’t be around to write up embarrassing yet hilarious posts for you.

Speaking of embarrassing yet hilarious things – today our canteen delivered another one of their famous signs for our enjoyment: 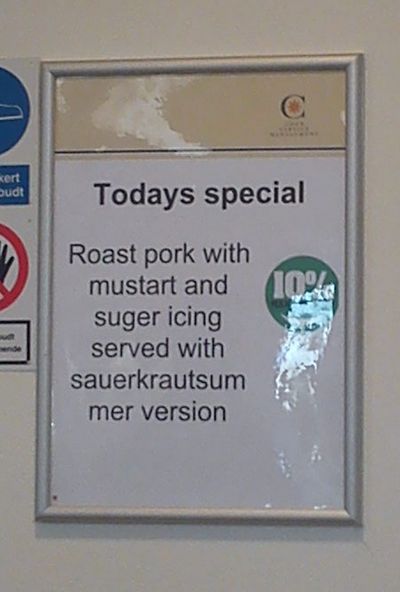 Today’s meal is brought to you by Abbot Suger

Don’t judge! Mustard Tart is apparently a thing that totally exists, so who can blame our canteen for deciding to abbreviate its naming? And then serving plain mustard instead…?

Also, it may appear to the uninitiated that a space is missing after “sauerkraut”. Little did you know, but it’s how Latin speakers used to refer to the dish. A typical lunchtime conversation in ancient Rome went something like:

“Lorem ipsum, I say! How does a bit of sauerkrautsum sound?”

“Delicious! But we must try the mer version. Ceteris paribus, et cetera!”

“Great, how about we stop talking gibberish and go eat then?”

On that confusing note I’d like to bid you all farewell for a few days and wish you an awesome weekend! May it be both hilarious and embarrassing.