One of the most amusing things about visiting a foreign country is the attempts to write signs in English.

Some mistranslated signs are confusing, others are not understandable whilst others could get you in trouble.

Have yourself a giggle and take a look at our mistranslated English signs. 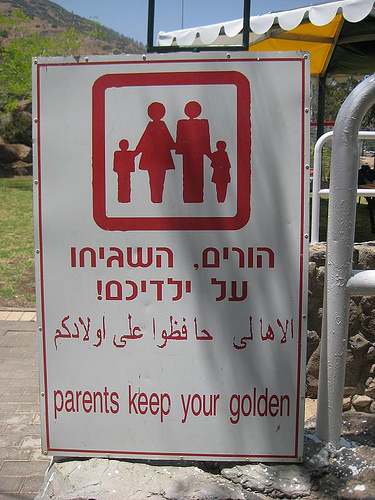 We start off with “parents keep your golden”, a sign from Israel.

The Service is Shocking
Even European countries that, on the whole, have a good command of English sometimes get it wrong like this sign in Norway: “LADIES ARE REQUESTED NOT TO HAVE CHILDREN IN THE BAR,” or this sign in Copenhagen airport: “WE TAKE YOUR BAGS AND SEND THEM IN ALL DIRECTIONS.”

And the service doesn’t get any better in Switzerland where one restaurant tells you: “OUR WINES LEAVE YOU NOTHING TO HOPE FOR.” But at least they are honest, just like this hotel in Bucharest who knew how guests would feel: “THE LIFT IS BEING FIXED FOR THE NEXT DAY. DURING THAT TIME WE REGRET THAT YOU WILL BE UNBEARABLE.”

And you certainly wouldn’t want to drink water in the Hotel Acapulco in Mexico because: “THE MANAGER HAS PERSONALLY PASSED ALL THE WATER SERVED HERE.”

But even English speaking countries can’t get signs right!

Don’t They Speak English?
A poster in Australia tried to offer a helping hand with this message: “ARE YOU AN ADULT THAT CANNOT READ? IF SO, WE CAN HELP!” Or maybe not. Then you get bemusing signs which stop you in your tracks and make you think for second like this New Zealand restaurant: “OPEN SEVEN DAYS A WEEK, AND WEEKENDS TOO.” They must have extra long weeks in New Zealand.

Then you have this highway sign in Australia that wants you to know: “TAKE NOTICE: WHEN THIS SIGN IS UNDER WATER; THIS ROAD IS IMPASSABLE.” Or these words of wisdom on the grounds of a private school in Scotland: “NO TRESPASSING WITHOUT PERMISSION.” Would you want your children to be educated there? Likewise, wouldn’t you want to give birth in a South African maternity ward where: “NO CHILDREN ALLOWED.”

With signs like these from English speaking countries you can forgive the Chinese for having a go with this sign at a paragliding site near Bejing: “SITE OF JUMPING UMBRELLA,” and a note on a pair of sports shorts included in a complimentary package offered by a Chinese hotel that said: “UNCOMPLIMENTARY PANTS.” Well, they are free, you can’t expect designer.

A sign from Korea, the ride is not operational due to bad weather!

In Russia, Communism Lives On
Communism in Russia supposedly collapsed in 1989, but it would appear not after reading this sign in hotel: “YOU ARE WELCOME TO VISIT THE CEMETERY WHERE FAMOUS RUSSIAN AND SOVIET COMPOSERS, ARTISTS AND WRITERS ARE BURIED DAILY EXCEPT THURSDAY.”

Even the local papers brag about it like this advert in the Soviet Weekly that announced: “HERE WILL BE A MOSCOW EXHIBITION OF ARTS BY 15,000 SOVIET REPUBLIC PAINTERS AND SCULPTORS. THESE WERE EXECUTED OVER THE PAST TWO YEARS.”

The Russians at least are much kinder and thoughtful towards visitors as this sign in a Moscow hotel suggests: “IF THIS IS YOUR FIRST VISIT TO THE USSR, YOU ARE WELCOME TO IT.” Perhaps the owner was an artist and planning to leave.

No Sex Please, We don’t Speak British
The Italians have a reputation as romantics and seducers, but you don’t realise how forward they can be until you go to a laundrette in Rome and are told: “LADIES, LEAVE YOUR CLOTHES HERE AND SPEND THE AFTERNOON HAVING A GOOD TIME.” Fair enough, but don’t go to this doctor: “SPECIALIST IN WOMEN AND OTHER DISEASES.”

It seems the Japanese also have a fetish for sex, especially at this hotel where: “YOU ARE INVITED TO TAKE ADVANTAGE OF THE CHAMBERMAID.” But not all hotels in Tokyo are so forthright like this one who ask: “GUESTS ARE REQUESTED NOT TO SMOKE OR DO OTHER DISGUSTING BEHAVIORS IN BED.”

Much like the Germans who are supposedly quite open about these things – except in the Black Forest it would seem: “IT IS STRICTLY FORBIDDEN ON OUR BLACK FOREST CAMPING SITE THAT PEOPLE OF DIFFERENT SEX, FOR INSTANCE, MEN AND WOMEN, LIVE TOGETHER IN ONE TENT UNLESS THEY ARE MARRIED WITH EACH OTHER FOR THIS PURPOSE.”

In a Nairobi restaurant: “CUSTOMERS WHO FIND OUR WAITRESSES RUDE OUGHT TO SEE THE MANAGER.”

Translated from Japanese to English and included in the instructions for a soap bubble gun: “WHILE SOLUTION IS NOT TOXIC IT WILL NOT MAKE CHILD EDIBLE.”

Car rental brochure, Tokyo: “WHEN PASSENGER OF FOOT HEAVE IN SIGHT, TOOTLE THE HORN. TRUMPET HIM MELODIOUSLY AT FIRST, BUT IF HE STILL OBSTACLES YOUR PASSAGE THEN TOOTLE HIM WITH VIGOUR.”

In an East African newspaper: “A NEW SWIMMING POOL IS RAPIDLY TAKING SHAPE SINCE THE CONTRACTORS HAVE THROWN IN THE BULK OF THEIR WORKERS.”

This article was written by John, sponsored by Housetrip.com, click here for apartment deals. If you have any more amusing signs, we would love to hear from you.