Today, after many months of deliberation, I have finally ordered a new laptop. Being a gadget freak this is like a mini-Christmas for me. Except for it’s September and Santa Claus is not in any way involved in this transaction.

Below I’ll give you three reasons why I made this decision. Speaking of reasons: I have zero reasons to structure this post in list format, but lack of good reasons rarely stopped me before. So here goes:

The “Blue Screen Of Death” is surely known to most of you by its far more catchy acronym – BSoD. It’s a standard feature that comes equipped with all Windows-based PCs. At random intervals, for reasons incomprehensible to anyone who isn’t Bill Gates, your computer will shut down and display some lines of white text against a blue background. This text will sound informative at first, but soon you’ll realise that it’s just computer-speak for “I broke, so fuck you!” 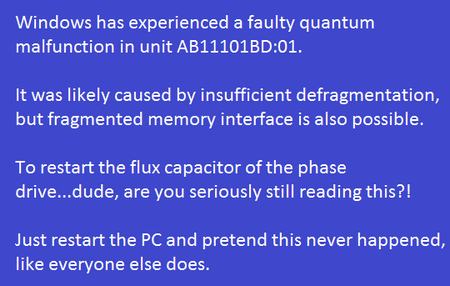 Another fun recent development is that my laptop’s cooling fan now acts as a coffee grinder. Well, it doesn’t actually grind any coffee, but it sure does a pretty neat coffee grinder impression. Every time it tries to speed up it sounds like helicopter blades slicing through a throng of advancing zombies.

I’ve tried taking the laptop apart and cleaning the cooling fan. Now it sounds like helicopter blades slicing through a throng of advancing zombies made of gravel. Since the cooling fan isn’t quite doing its job the laptop overheats way too fast and skips straight to BSoD mode.

I’ve had this laptop for over four years so any warranty and insurance on it have run out by now. Oh yeah, and the company that made my laptop has gone bankrupt around two years ago. It can’t possibly pay to start replacing components and making my laptop zombie-friendly again.

I don’t play computer games as much as I used to, but I do play them every now and then. One thing you should know about most modern games is that they require more processing power than NASA’s space shuttle launches. That’s what it takes to realistically render hundreds of enemies succumbing to an onslaught of bullets from your guns.

This means that if I want to play a new game on my current laptop I have to turn the graphics settings all the way down, making my enemies resemble indistinguishable square blocks instead of infected Nazi robot soldiers that they truly are. What, you haven’t heard of that game – Infected Nazi Robot Zombies: The Shooting Of?! Is it all in my head? Damn, somebody should make that game, like, now!

Anyways, what I’m saying is if I wanted to shoot indistinguishable blocks at other blocks then I’d still be playing Tetris.

My new laptop should be arriving by the end of the week. Are you excited? You should be, I’ll be able to type out these blog posts on a brand new 17 inch screen. We’ll be communicating in HD and all that jazz!

Have you recently purchased a new gadget? A new electronic appliance? A new coaster? What do you think of infected Nazi robots and their impact on the zombie community?

8 thoughts on “3 reasons I’m getting a new laptop”