By now you must have heard about the failed “Ecce Homo” restoration. If you haven’t, I hope the rock you live under is both comfortable and warm, despite neither of those features being characteristic of rocks. In any case, if you haven’t heard the story before and refuse to follow the link I’ve provided for some stubborn reason, here’s a quick recap:

In a Spanish town of Borja, an elderly lady by the name of Cecilia Giménez attempted to restore a deteriorated fresco of Jesus, “Ecce Homo”, in a local church of Santuario de la Misericordia. At some stage it became apparent that her amateur efforts didn’t quite yield the desired results. More specifically, Cecilia transformed Jesus into a nightmarish marshmallow-man. 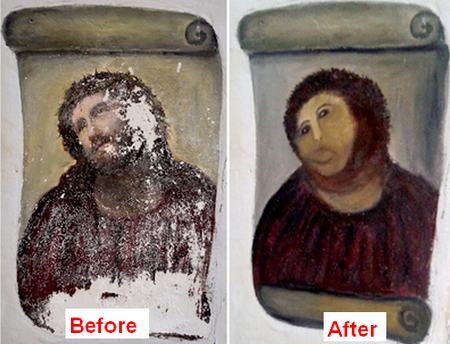 Arguably the easiest “Spot The Differences” puzzle in existence

Reactions to the “Ecce Homo” incident ranged from outrage to amusement. The Internet, of course, exploded with innumerable parodies of the botched fresco job.

However, amidst all of this hype, nobody seemed to be asking the truly important questions. Well, that’s why I’m here!

Reportedly, Ms. Giménez “had been restoring [the fresco] for years and had to give up before completing it” (emphasis added, because why not?).

Look, I don’t mean to brag, but I can draw up a pretty neat stickman figure in a matter of seconds. A simplistic approximation of a human face would take me a minute or two. Add a few hours to go grab some special fresco-friendly paint and I’d have Jesus looking like Pac-Man within a day, tops!

Hell, even Mr. Bean managed this feat in just over 5 minutes:

How can it take years to give Jesus a head-encompassing beard and remove all distinct features from the lower half of his face?!

Even more scarily…she “[gave] up before completing it”?! What was her next move?! Spend another two years meticulously adding a Spiderman mask over his face?! At what point in the multi-year saga did Ms. Giménez feel she was on the right track, but simply didn’t have sufficient time to perfect her masterpiece? Which brings us to the next big question…

We all make spur-of-the-moment mistakes every now and then. Just the other day I inadvertently soaked my fully-clothed self while fiddling with the shower tap and standing directly under the shower (true story). However, it takes a certain twisted combination of determination and denial to methodically butcher the face of Jesus over the course of, I can’t stress this enough, freaking years.

Please take another look at that “Before” photo. Sure, the paint has fully come off in places, but Jesus is still very much recognizable as a person in possession of a face. Splash some brown paint onto those white spots and you have a very basic, yet passable repair job.

How do you manage to gradually, day-by-day, morph Jesus into an androgynous bear-like creature and at no point consult with anyone about the structure of a human face? Which, in turn, brings us to…

2. Why has nobody else noticed anything until too late?

Here it is important to note that at no point did Ms. Giménez take “Ecce Homo” home to conduct her restoration work. Her “repairs” were being done inside the church where the fresco was, “in broad daylight” and with the approval of the local clergy.

Day after day, numerous people witnessed poor Cecilia labour over what looked increasingly like a bandaged head trauma victim screaming in agony through what was once a functioning mouth. Nobody, not a single person, thought that maybe, just maybe, Cecilia wasn’t quite the next Leonardo da Vinci. Nobody questioned whether this 80+ year old lady was the right woman for the job, even after seeing her systematically remove all human features from the two centuries old fresco.

Or maybe they did notice! Maybe they enjoyed watching this train-wreck unfold before their very eyes and waiting to see just how bad it gets? Afterall, isn’t that the reason people watch Jersey Shore and Here Comes Honey Boo Boo?

1. Why no Kenny connection?

Now for the final and by far the most pressing question. Why, despite so many memes and parodies of the fresco, did nobody bring up its uncanny resemblance to Kenny from South Park? Kenny, with his brown-orange hoodie and his face devoid of everything but eyes?! Am I the only one noticing this?!

Oh My God, you ruined Jesus! You BASTARD!

I, for one, am eagerly awaiting the inevitable Youtube video remix starring Ecce Homo Jesus as Kenny McCormick! Aren’t you?!

What are your thoughts on Ecce Homo restoration? Do you have any unanswered questions of your own? Do you think Kenny was involved?!

28 thoughts on “4 questions sparked by the “Ecce Homo” restoration”