In my last post, I gave you all a warning: I said you could expect me to talk about cats incessantly from now on. You probably laughed it off and were all like “Yeah, good use of hyperbole, dude.” Well, here comes a post about cats. Who’s laughing now?!

We’ve been doing research while waiting for our cats. Basic stuff like how to prevent cats from scratching furniture, how to train them, which plants in our house are likely to dissolve their stomachs out of existence.

In my search for cat toys and equipment I have come across some…curious items. I decided to combine a cat post with my established and proud tradition of making fun of ridiculous stuff I find online. Without further ado, allow me to introduce some items that were clearly designed by people who think we’re at war with the feline species.

Upon first glance, this looks like an innocent little toy for your cat. It’s clearly designed to stimulate the cat, giving it an array of entertainment options: catching a ball or punching a mouse right in the face. It’s nothing but all kinds of awesome, right?

You see, this toy is designed in such a way that the ball inside can never, ever be taken out. No matter which side the cat reaches out from, how many times it paws at the ball in furious desperation and chases it in maddening circles, the ball will stay forever trapped inside its plastic, yellow-red container. That’s not a toy, that’s the first real step on the path to kitty insanity. This work of the devil teaches cats that life has no meaning and that all efforts to achieve something, no matter how clever and dedicated, are futile.

The mouse is just the cherry on top (and it’s also on top, so I’m sure there’s a clever and hilarious pun in there somewhere). While the cat is engaged in a senseless game of “chase the ball round and round and round ad infinitum,” this insufferable little bastard is just sitting there the whole time, looking down on the ordeal and laughing. Laughing! Just look at him!

The name of the “toy” is quite accurate, albeit incomplete. It should’ve been called “Crazy First Circle Of Hell.”

Yes, I am aware that it’s a dog in the chair. Thank you. If you had followed the link instead of offering “spot that animal” lessons, you’d know that the chair is designed for cats and dogs alike.

Whoever invented this chair tried to answer one simple question: “How can we let our pets share meals with us while simultaneously preventing them from walking into our soup?”

Horrifyingly, the only answer they came up with was: “Suspend them several feet in the air in a claustrophobic box they are strapped to against their will.”

In case you want to question the “against their will” part, here’s a helpful excerpt from the product description itself: “Two tethers on the chair protect your dinner guests against any lapses in etiquette“. That’s just an unnecessarily convoluted way of saying “strap your fucking cat to the goddamn chair.”

It doesn’t help that the dog in the picture is either paralyzed with fear into motionless insanity or has been dead for years.

“What the fuck is that?!” is the question on both yours and that cat’s minds. You are lucky, because I can simply provide you with a written answer. The cat, however, will have to get that answer the hard way, by being zapped with static electricity as it attempts to explore this curious new object. Hurt and puzzled, it may attempt to return to this mat to understand what had happened. ZZZZZZAP!

That’s right, you too can teach your cat to never be inquisitive by electrocuting it repeatedly. Made for people who want to discourage cats from going on their sofa but are too lazy to bother personally training it. I’m looking forward to the baby edition. That way we can cease all verbal interaction and just let invisible electric pads raise our pets and children. Until we get robots to do that for us, that is. 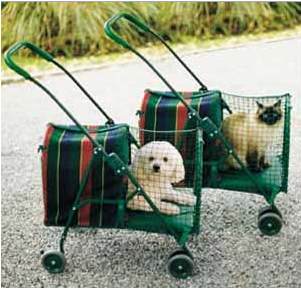 Have an indoor cat but want to take it out for a walk? Want to let your cat experience the joys of the outside world but too afraid it might get lost? Looking for the easiest way to show your friends and neighbors that you’re a sadistic psychopath? Then this product is for you!

This “stroller” lets you bond with your cat by forcing it to accompany you on errands while confined inside a little cage. Because nothing says “fun” like being carted around town in a tiny iron jail that’s barely large enough for you to fit into. I think the looks on the dog’s and cat’s faces say more than I ever could.

Take special note of how zero effort has been put into designing this contraption to look like anything other than a depressing prison on wheels. Why not just throw a metal cage onto a wheelbarrow and be done with it?!

Until today I was blissfully unaware of this product’s existence. On a related note, until today I held on to the remote hope that a merciful God was out there somewhere.

This may be the most depressing sight I’ve ever witnessed, and I’ve had the misfortune of seeing trailers for Jersey Shore and Here Comes Honey Boo Boo.

Here’s a fun challenge for you all: Go to that website and try to find one single photo of a cat in a wig that doesn’t look like it either wants to die or murder all humans.

While you’re doing that, I’ll just go curl up in a corner and cry quietly while rocking back and forth.

34 thoughts on “5 items for (torturing) your cats”