I’m no stranger to DIY projects. Why, just the other day I submitted a short tale of my ingenuity to Bytestories.com.

In the past I’ve freely ridiculed insane inventors of questionable self defence gadgets and children’s dolls. Today I do the opposite and bring you three inspiring stories about dreamers who took what most of us would consider complete junk and turned it into transportation devices. What have you done with your free time?

What does one do with firewood?

“Throw it into the fire, to make more fire” said pretty much all of you. “Duh!” added those of you especially inclined to celebrate your intellectual superiority. Well, sheeple, how about thinking outside the box for once, like Istvan Puskas? This Hungarian man looked at firewood and figured it would make the perfect material…to make a motorbike out of!

As if firewood-based motorbike wasn’t surreal enough, Istvan used cattle horns to make the exhaust pipe and handlebars. Finally, the gas tank is a wine barrel, because at that point, why the fuck not? I wish I could say the motorcycle is powered by human screams, but alas, it uses a good old conventional Fiat engine. I guess nobody’s perfect.

Did I mention it’s totally functional? Because it totally is. You can even check it out in action:

While we pat ourselves on the back every time we remember to recycle a beer can, a Nigerian student Mubarak took the “nothing goes to waste” concept to the next level. He acquired some spare parts from old motorbikes and cars, some scrap aluminium, and built himself a little something I like to call a freaking functioning goddamn helicopter. 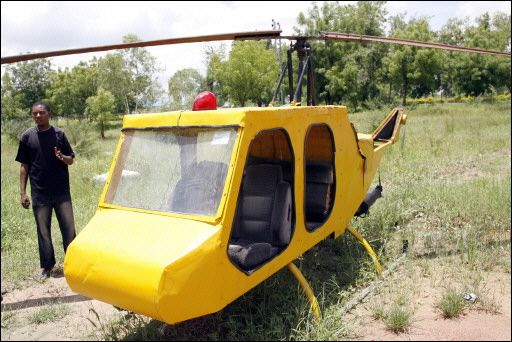 It took Mubarak eight months to build the helicopter, which is capable of flying at a modest altitude of around 7 feet. This may not sound like much, but the only thing I’ve ever been able to make out of assorted pieces of junk was…a pile of junk…with approximately zero ability to fly. So there’s that.

Mubarak is already working on his second helicopter – a two-seater that should be capable of three-hour flight at an altitude of around 15 feet. Mubarak is a truly inspiring man of action. I get exhausted just thinking about it…think I’ll go have a nap.

Most of us, upon seeing a large collection of old oil barrels will just shrug and move on with our lives, making a mental note to never visit that dodgy part of town again. A few of us may borrow a barrel or two to roll down a hill in for the filming of a Jackass re-enactment.

And then there’s Tao Xiangli, who looked at discarded metal barrels and thought “Yes! I can totally see myself being trapped inside these while plunging into the dark depths of a yet-to-be-specified body of water! Where do I sign up?”

Over the course of two years this ambitious inventor built and tested his very own submarine, made primarily out of old metal barrels and refusal to accept the laws of engineering and basic safety measures.

This home-made marvel boasts all the necessary components of a submarine, including oxygen supply, depth control tanks, two electric-motor-driven propellers and a periscope. It even features a manometer, which I can only assume is a tool for accurately measuring Tao’s inhuman levels of manliness. 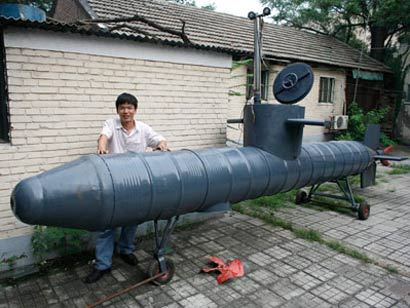 OK, so maybe it could use some work in the not-looking-like-Megatron’s-backup-dong department. I said “functional”, not “pleasing to the eye”, or even “easily distinguishable from the junk it’s made out of”.

All penis jokes aside, this phallic submarine can reach the depth of 10 metres. Tao has been doing test dives in a local reservoir, but his hope is to eventually take it out to the ocean, because when you make submarines out of freaking oil barrels the ocean is just a pitiful puddle to you!

Enjoy Tao’s submarine, while I go re-evaluate my life choices.

22 thoughts on “3 functional transportation devices (made of junk)”