We’ve now had Django and Pebbles at home for almost two weeks. They’re everything you’d expect kittens to be: cute, cuddly, playful, too-curious-for-own-good. The lot.

However, I’ve been noticing some patterns in their behaviour. Patterns that hint at things not being quite right with these little cats. Yes, I’m afraid our two kittens are a bit…confused. I was going to say “stupid”, but I hear that cats can steal your breath, so I won’t be taking any risks.

Prior to their arrival we have purchased a bucket-load of different toys and other cat items. Some of these are used as prescribed, but the vast majority aren’t. It appears that Django and Pebbles are struggling to figure out the purpose for most of their stuff. Or maybe they’re just messing with our heads. It’s probably the latter.

What’s that? You want examples and you want them right now? Why yes, imaginary voice in my head, I can indeed provide you with the examples you seek.

We’ve built two little tents for Django and Pebbles to sleep in. We found two pillows that fit neatly inside the tents. We placed these tents in comfortable, out of the way locations, so that kittens could sleep in privacy. Here’s how these tents looked to begin with:

Did any sleep occur inside these tents? None. Instead they’ve been used for everything from ambush spots to hide-and-seek locations. At some stage a tent played the role of an advanced roller coaster – Django sat inside as it was being rolled down a small flight of stairs by Pebbles.

If you stay very very quiet, they can’t see you.

After a few days one of the tents was showing signs of wear-and-tear and had to be patched up by generous application of duct tape. This proved entirely pointless. This is how the “tent” looked earlier today:

Katka has also been lovingly growing some special cat grass for the kittens. She checked up on its growth daily, eagerly awaiting the day it could finally be given to the cats. The day finally arrived and Katka proudly placed the grass in front of Django. Django interpreted the grass’ demeanour as threatening and proceeded to defend himself. With fists. Or, more accurately, paws. Fawsts? Nevermind, here:

We also have a so-called “Scratching Wave”. Whoever manufactured this thing naively assumed that it would be used for scratching, as the laughably incorrect product shot demonstrates:

That cat is either glued in place or is made of papier-mâché.

I can confidently announce that neither Django nor Pebbles have scratched any parts of this product at any point time. They’ve already used the tent for that purpose. They do love sleeping on and under the “Scratching Wave”, though, so there’s that.

In short, our cats insist on using things for anything other than their intended purposes. Occasionally this works to our advantage, like when we had to weigh Django a few days ago. We figured we could use our kitchen scale to do so, if only we could somehow get him to stay inside a bowl while we placed it on the scale. We brought Django over to the bowl and carefully lowered him inside, ready to grab him should he try to escape. Apparently the bowl offered unprecedented comfort, because Django stayed inside of it for the next half hour:

I don’t think I’ll ever understand these cats, but as long as they don’t start building sand castles out of their kitty litter we’ll be just fine.

I’ve just realised that this post inadvertently turned into Django tribute, with very little mention of Pebbles and absolutely no photos of her. Here’s one to compensate (with a bonus Django appearance): 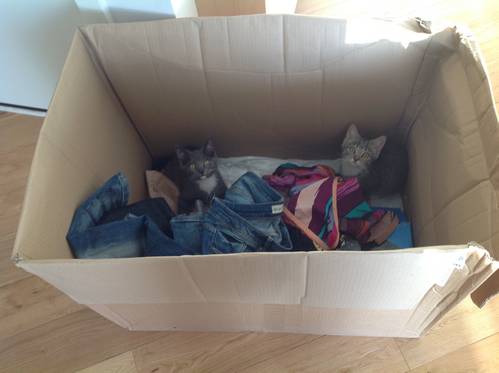 Pebbles is the one looking cute and surprised.

12 thoughts on “Our cats are backwards”