Nobody knows this better than Russian TV. Only two days ago I’ve shared a minor example of failed propaganda: a single TV channel interviewing the wrong person.

Question: What happens when not one, not two, but three lying TV channels try to create propaganda at the same time? A complete and utter clusterfuck, that’s what! And when it happens, it’s goddamn beautiful. So what happened, exactly? I’m glad you asked… 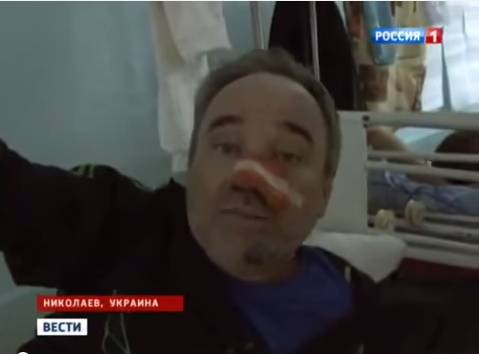 Andrei’s story is heartbreaking: This fine spring day he went out to peacefully protest against the neo-Nazi Ukrainian government. Then, suddenly, he and other protesters were attacked by radicals. This poor man is now incapacitated for at least six months. Tragic!

There was a tiny problem: A mere half-hour earlier, a second Russian channel, NTV, ran a segment about a radically inclined supporter of Ukrainian neo-Nazis. This despicable man’s name was…Andrei Petkov. You may recognize him: 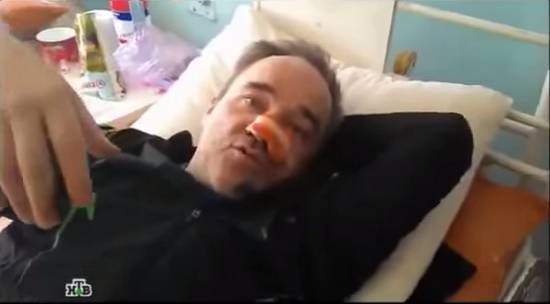 This Andrei Petkov (not to be confused with the other, exactly-the-same-looking man with the exact same name) came to Ukraine from Germany. He was on a secret mission for a secret European organization that wanted to secretly support the fascist neo-Nazis in fascist Ukraine. He brought with him 500,000 Euros and recruited 50 European hired guns, in order to suppress the innocent protesters. (Protesters like the other Andrei Petkov, for example.)

When things got dicey, the same Ukrainian neo-Nazi radicals whom he tried to support ended up turning against Andrei. He got injured and is now recovering in the hospital. Tragic!

Confusing and contradictory? Sure, but these things happen, right? Maybe he was speaking too fast and the two channels misinterpreted him. It’s not like there was a third channel reporting on a different Andrei Petkov…except, of course, there was.

NTS TV channel in the presently-occupied Crimea told an inspiring story of a heroic pediatric surgeon. His name? Andrei Petkov: 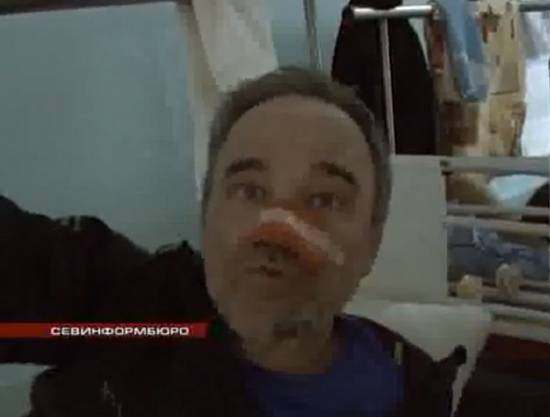 This shining beacon of hope!

This Andrei Petkov—a surprisingly common Ukrainian (and German) name—is a true Ukrainian patriot. He was residing in Germany, but once he’d heard of the neo-Nazi threat in Ukraine, he traveled to his home city of Nikolayev with a large sum of his own money, in order to help organize local peaceful protests. This altruistic man was right there in the thick of it, when neo-Nazis fascistically attacked local residents. He selflessly tried to treat the wounded in his makeshift emergency tent, but alas…he himself fell victim to the fascists. They have injured his face and leg, and now he’s in a local hospital, recovering. God bless this brave man! Tragic!

It wasn’t long before regular people and Internet sites picked up on this bullshit. Russian response? They—I shit you not—accused Ukrainian TV of spreading the original, inconsistent story (whichever one that was). “How dare they accuse this sweet man of being a paid actor working with Russian reporters?” they yelled. Apparently, Russian professionals forget that the Internet has a long memory.

Soon, the ruse was becoming way too obvious to ignore. Source after source reported on these inconsistencies and fabrications. In the end, even the Russian channels could no longer deny having been caught red handed. So they did what any responsible professional would do in this situation—owned up to the whole thing. The end.

Instead, apparently following the foolproof “fighting fire with fire” logic, they decided to fix all of their lies with…more lies. So what did they say, exactly? That these three men were actually triplets, who happened to have the same name? Don’t be silly, that would have been ridiculous! No, what the Russian channels actually claimed was that—I hope you’re sitting down—Andrei Petkov was officially schizophrenic and truly believed all three of his made-up stories! This mentally ill gentleman managed to fool the astute TV reporters with his convincing lies. Never mind the fact that some of the earlier news segments invited “friends” of Andrei to corroborate his story. Never mind that this “explanation” actually introduces more inconsistencies than it fixes. Nope, schizophrenia is to blame.

I’m not sure whether to laugh or cry. On the one hand, the above craptastic bullshit extravaganza is objectively hilarious. On the other hand, please remember that these news channels currently shape the worldview of many Russian citizens, who have largely been left without any independent media. Sadly, not many people turn to the Internet for their news, and even if they did—Putin is working on “fixing” the online information space as well.

But enough about the sad shit for now. Instead, I leave you with a fresh video of neo-Nazis running loose and killing ethnic Russians in my home city of Kharkov, Eastern Ukraine. (Warning: Graphic content!) My cousin shared it with me a few hours ago. He’s also in the video (getting a haircut at 1:13 and 2:03). Truly it’s a sad state of affairs, and Ukraine really is on the brink of civil war. I can see why Putin is concerned about the well-being of his Russian brothers: