Hey, so remember Yanukovych? The exiled president of Ukraine? The man who, according to some sources, had robbed Ukraine of about $100 billion? The man who had used the stolen money to build himself an extravagant mansion full of ridiculous, over-the-top souvenirs—like the literal two-kilogram golden loaf of bread?

But Yanukovych isn’t all about stealing money and spending it on bizarre, tasteless crap. Some of that bizarre crap is actually quite tasteful. Some may even call it “art.” I’m not one of those “some,” but you know who is? Yanukovych. It turns out he’s got a keen eye for portraits. Not just any portraits, mind you. Yanukovych is a connoisseur of a very specific artistic style: Yanukovychism.

You see, among the mountains of head-scratching discoveries in his mansion were a series of portraits. All of them feature Yanukovych in various inexplicable situations that defy the laws of logic and sanity. All of them are designed to elicit gasps of admiration, whistles of appreciation, and cries of “What the dickless Devil is this?” Behold: 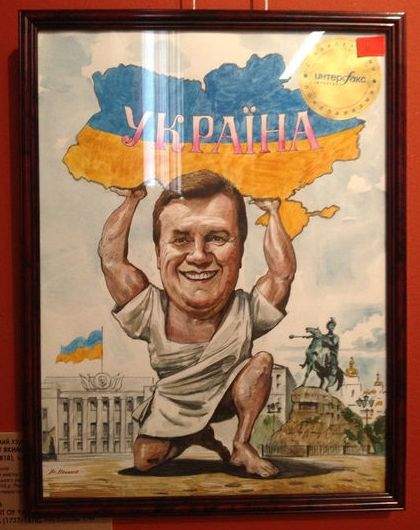 Oh look at that! It’s Yanukovych using Ukraine to pump iron. It’s just like real life, except in real life he used the country to pump billions of dollars into his offshore bank accounts, but, you know, think of it as a delectable metaphor. You may call this portrait narcissistic, but if you truly think about it, it’s actually quite…oh what the hell, yes—this is the height of narcissism. Next:

“There! There goes unstolen money! Take it!”

This picture perfectly captures the resilience and valour of a man who had courageously sent waves of armed police against the Maidan protesters and then fled the country when things got out of hand. Beautiful.

Now, I must give you fair warning: There’s nothing I can say to adequately prepare you for what comes next.

You have a choice to close the browser, turn off your computer, and back away from it slowly, having never experienced the mind-shattering horror of the picture below.

No, really…it’s about to get insane up in here.

I warned you, but you haven’t listened.

And that’s why you now have to face the inevitable.

This one’s on your conscience:

I fucking warned you! Stop screaming! Don’t claw at your eyes! You only have yourself to blame!

I tried to write a thorough commentary to this picture, but all that came out were ear-piercing screams of unfiltered terror and streams of unstoppable tears. Instead, I’ll just leave you to ponder your mistakes and whether life still has any meaning.

Fun fact: Yes, I did have to Google the phrase “Yanukovych naked” when researching this article. Let’s hope no potential future employers ever get a hold of my search history, ever.

21 thoughts on “WTF Report: “The art of being Yanukovych””