So I’m on vacation in my home city of Kharkov, Eastern Ukraine.

I know, I know. You’re all like, “Eastern Ukraine? Isn’t that where all the Nazi Bandera fascists are brutally murdering Russian speakers, just for fun?”

What can I say? I’m an extremely brave Russian-speaking Ukrainian. I have flown right into the center of the unstoppable Nazi rampage. Not only that, I brought my wife with me. For moral support. Plus she makes for a pretty effective human shield, should that ever become necessary.

I must admit, though—the Nazis have clearly learned how to disguise themselves. I have spent the first couple of days desperately trying to find a single Nazi. No such luck. Sneaky bastards.

On the third day, however, I went to Gorky Park with my wife and my niece, Leah…that’s where the cruel reality of the new Nazi Ukraine finally made itself known.

It all started peacefully enough. We were walking around the park, posing with the seemingly neutral statues: 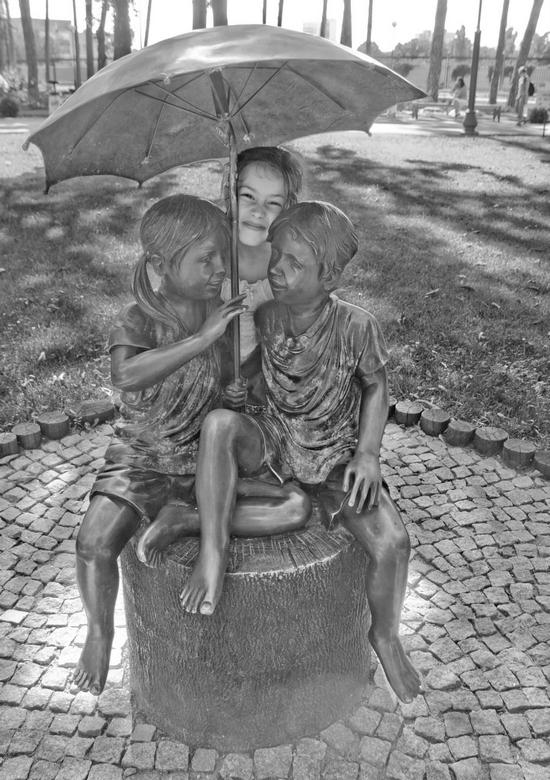 When, suddenly, one of them started openly harassing my wife: 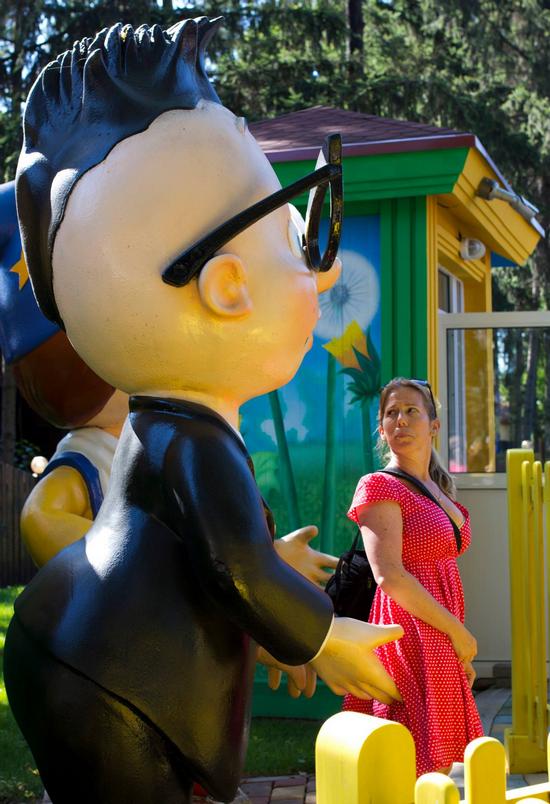 Clearly, I couldn’t let such an audacious act of violence go unpunished. I ran forward to rescue my wife, which is when we realized that we were actually dealing with sadistic Nazi monsters. One of them immediately shattered my face with a tennis racket—the weapon of choice for Nazi militia: 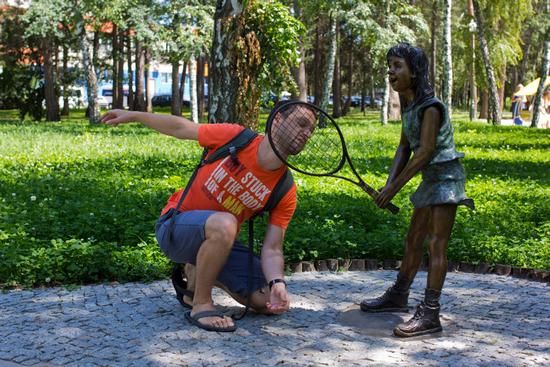 While I was busy getting my face smacked, my poor innocent niece fell under the Nazi spell and was hypnotized by their relentless propaganda into becoming one of them: 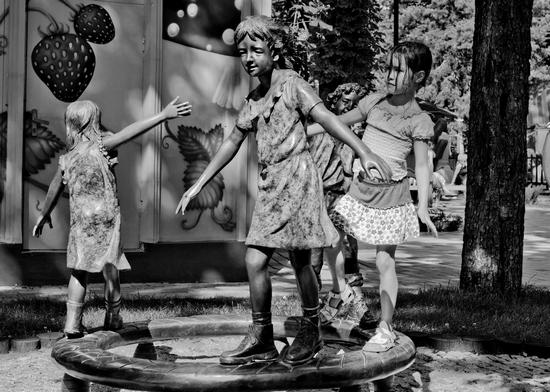 “Leah! Noooooooo!” I screamed, trying to modulate my voice so as to prevent my now-shattered teeth from falling out of my mouth. I jumped forward to push Leah out of harm’s way. It worked. Leah was free. Me? Not so much. One especially heartless Nazi bastard caught me and went straight for my eye: 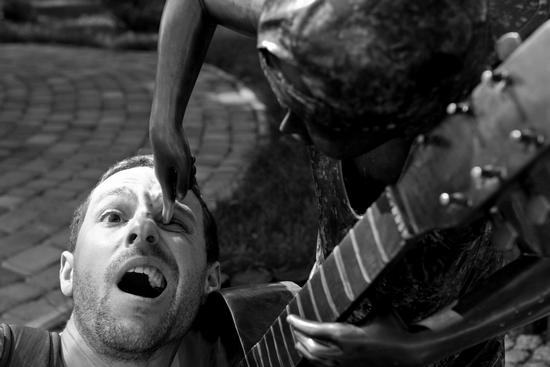 Half-blind, I stumbled in the general direction of Katka and Leah. That’s when I witnessed the most horrific sight of my entire life: The psychotic Nazis were making my family skip rope for their own amusement: 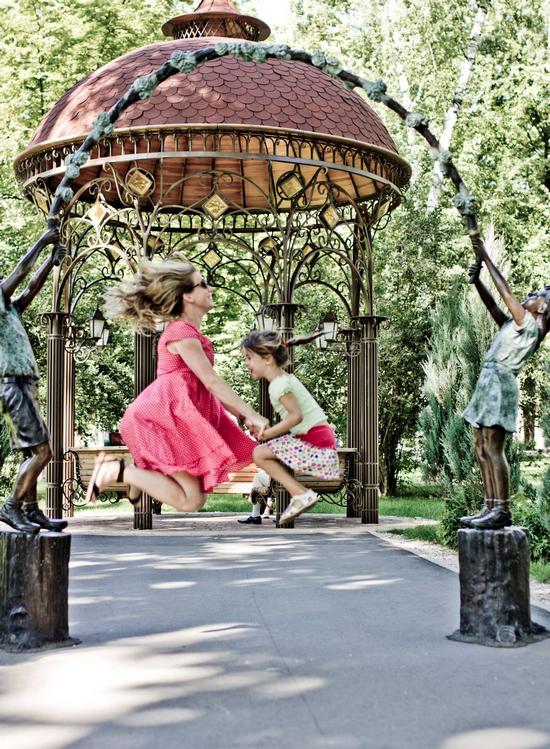 “You sick, sick bastards,” I screamed, “How dare you make my family jump to the sound of German polka?! This is the worst music one can possibly imagine!”

I was wrong about that last part. The German polka stopped, but something far, far worse took its place: Justin Bieber. God, they made me jump up and down to Justin Bieber: 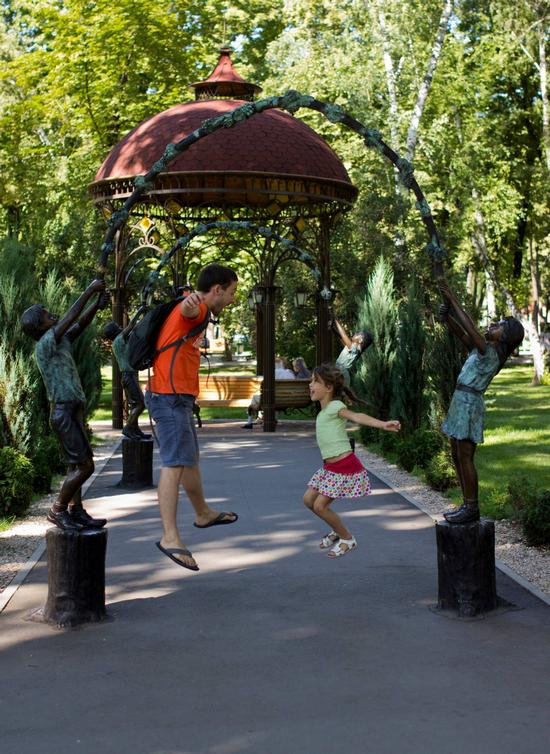 My energy sapped, my will to live fading, I begged for their mercy. “Baby, baby, baby, ooooooooooooh,” I repeated, over and over again. My niece’s unprecedented act of bravery was the only thing that helped us escape alive. With an ear-shattering scream of “I haaaaaaaaaaate Biebeeeeeeeeeeeer,” my niece lunged forward and stabbed the main Nazi right into his cold, evil heart:

He immediately turned into a puddle of delicious chocolate milk, like all Nazis with a punctured heart are wont to do. Katka, Leah, and I escaped with our lives intact, but I shall never mistrust Russian propaganda ever again: Ukrainian Nazis are everywhere, and they are among us—in parks and public areas, they stand around, biding their time, waiting for the perfect moment to come alive and strike.

My advice: Always be on your guard. Also, learn the lyrics to Justin Bieber’s “Baby.” You’ll need them.

9 thoughts on “The Nazi statues of Eastern Ukraine”