If I had to compare my drawing abilities to something, I’d say they’re on par with a toddler’s very first art project on his parents’ kitchen drawers. Except the toddler has a better imagination and can hope to one day achieve greatness. Me? Not so much.

I was recently over at Pamo’s World, run by fellow blogger and comic-maker-person Pam. If you don’t know Pamo’s World, then head on over there right now…for your own sake…this post only gets worse from here.

Pam shared one of her very first comics with the readers, which led me to mention my (lack of) drawing skills, because I’m very good at making every discussion about me. Pam doubted that things were as dire as I’d made them sound. I insisted they were. One thing led to another, and now your unprepared eyes are about to get assaulted by my only attempt at ever doing something approaching a webcomic. You’re about to learn exactly why I don’t draw.

I draw inspiration (“draw,” ha, classic) from Pam, who usually centers her comics around her daily life. This one’s about that one time I bugged my wife into buying an awesome board game called King Of Tokyo (I’m a toddler mentally, too). 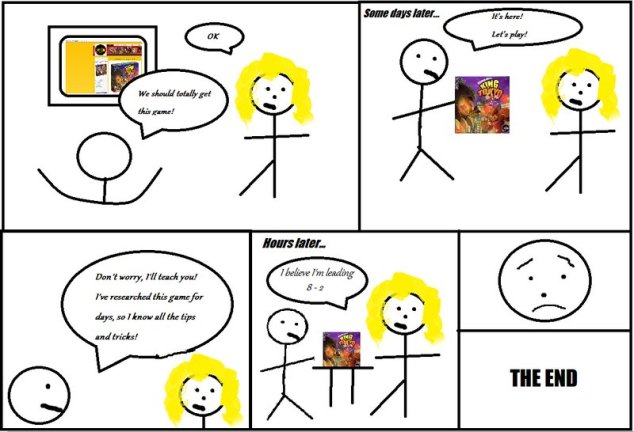 Yes, that was done in MS Paint. No, it would not be any better if I did it by hand. Trust me. Yes, I did draw my wife like that because of my terrible skills. No, I don’t hate her at all. Quite the opposite, really.

This was officially my only webcomic. Let’s never speak of it ever again.

27 thoughts on “My first (and only) webcomic”