Remember how I told you we were expecting a baby? You don’t?! You should really pay attention, I mentioned it literally two sentences ago.

Yeah, so I’m a dad now. Little Nathan was born on May 17. Nathan and his mom are both doing well. We’re getting used to the new parenting role.

Speaking of which, here are a couple of unexpected things I’ve learned, now that I’m a dad.

1. Babies don’t come from where you think they do

For one, I saw a total of zero storks at the hospital. Really. Not a single stork. Not even a storkling (is that a thing?). Finding babies in a cabbage patch? Also complete bullshit!

I don’t know what kind of sick fucks came up with these misleading myths, but if you believed them like I did, you’re in for one serious horror show once you get to the hospital with your wife. You’ve been warned. Maybe Google that stuff in advance, yeah?

2. If you have cats, they’ll freak right the hell out (for a while)

Our cats were alone for a few days while we were staying at the hospital. Well, not completely alone. We’re not monsters. Our neighbors dropped by to feed them. Still, they weren’t too happy once we got back, and they got significantly not-too-happier still when they realized we brought that thing home. (I’m convinced “that thing” is the term Django and Pebbles use for Nathan. “Hairless kitten” may be another one.)

For the first few days, their mood oscillated between cautious curiosity and utter shock. Case in point: 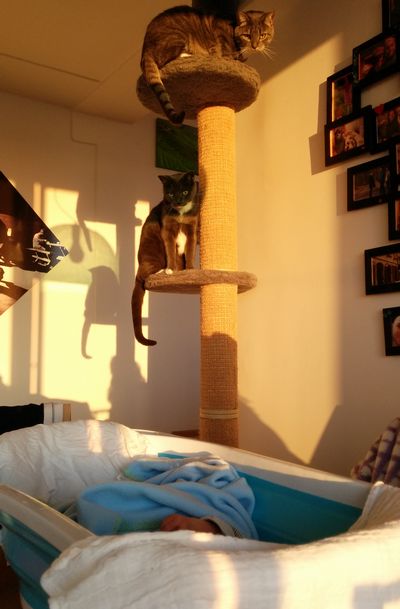 Once it dawned upon them that the baby was here to stay, the cats went into full “wounded diva” mode. At one point, Django gave me the cold shoulder when I tried to pet him. I may be imagining this, but I swear I could hear him mumble, “yeah, don’t do me any favors, man.”

They’re fine now, though. Cats are resilient like that.

3. There are entirely too many baby apps for your smartphone

Do you want to get some parenting tips? There’s an app for that. Tracking your son’s nap times? Get an app. Lullabies? App. Baby exercises. App. Want to book an anonymous flight ticket to escape to another country while your wife and son are sleeping? There’s probably an app for that. I mean, I assume. It’s not like I checked. *coughs nervously*

One of the nurses gave us a sheet of paper with a table where we could track Nathan’s feeding times. Cleverly, I figured there’d be an app to take care of that. Less cleverly, I ended up downloading one that tracks not only feeding times but also sleep, diaper changes, baths, playtime, tummy time, walking outside time, crying-helplessly-from-having-to-track-every-little-thing-about-your-baby time.

When a mildly OCD person like myself gets an app like that? Not good, as you might imagine. We’re talking about a guy who once chased his then-future-wife all around Copenhagen to take pictures of over 100 colorful elephant statues for a virtual collection. That is a thing that happened.

4. Your husband-wife communication will get…weird

Every couple has a sort of inside language—little words and phrases that mean something unique to just the two of them. When the baby comes, this gets extended with new stuff. That’s when you get phrases like, “the right boob is 10 minutes behind,” whenever the baby eats more from the left than from the right (thanks, stupid baby tracking app).

Eventually, this just gets shortened to military-style snap communication. “BFR, eleven ten to eleven fifteen.” That may sound like crazy talk, but what it actually means is “breast feeding on the right, from 11:10 to 11:15.” So, yeah, crazy talk.

And then, once you both are exhausted, you just get into awkward situations where you think you’re understanding each other when you’re clearly not.

Wife: “Can you bring the white things from the bedroom?”

Wife: “No, just the white things.”

Wife: “Oh, no, that’s not what I meant. I meant the…how are they called…the things for wiping?”

And so on. It’s pretty incredible how two otherwise functioning adults can be so quickly deprived of their mental faculties by a tiny, three-kilogram dude.

5. Sleep is for the weak

Some people claim that you need around seven or eight hours of sleep a night. That’s ridiculous! For one, no you don’t. For two, that’s grossly inefficient. If you spend that much time sleeping, that’s one third of your entire life right there. Wasted. On sleep.

I found that if you skip sleep altogether, you can accomplish a lot more than before, like reading that book you never finished, cleaning your house, catching up on emails, preparing this plane of existence for the imminent arrival of our master Lord Xenus of Alderia. Oh, yeah, about that…

On day four of your no-sleep marathon, you’ll notice strange figures shifting sneakily through your house. You’ll try to grasp at them, but your hands will pass right through them as if through air. At that point, what little is left of your logical brain will try to convince you that you’re seeing things that don’t exist. But you’ll know better. You’ll know!

Then the voices will start—mere whispers, at first, but they’ll grow louder. And louder. AND LOUDER. Until they scream at you with the power of a million shattered souls and demand that you start building a portal that connects this universe to the kingdom of Alderia and its supreme overlord, Lord Xenus. Lord Xenus is omnipotent but also kind and merciful. If you do his bidding, he shall grand you eternal life by his side as his loyal servant. All you need to do is obey the voices. OBEY THE VOICES!

Tremble before his awesome might, you puny mortal feeblings! Hear his words and submit to his will, for only then can you hope for a chance at salvation. Embrace the darkness. Let it seep into your very skin and imbue you with its powers of immortality!

CAN YOU FEEL IT?! LORD XENUS IS COMING! HE’S ALMOST HERE! TOGETHER, WE SHALL RULE ALL THINGS!