So gay marriage is legal in the US now. Yay, right?

All people who love each other can finally get married, whatever their sexual orientation. Time to celebr…oh:

Right, I forgot. Gay marriage will ruin traditional marriage. Of course. We all know that “marriage” is a finite resource, and now that gays will start using it up, there’ll soon be nothing left for everyone else.

“But if anyone can get married, my straight marriage will no longer mean what it used to mean!”

Wait…did you get married to show your love and loyalty to your partner or to win some kind of “traditional marriage” bingo? Your marriage is just as strong or just as weak as it was yesterday. If your marriage is easily ruined by gay people getting married, maybe they’re not the problem. Being straight is not an achievement. You don’t get to wear that fact as a badge of honor.

“But gay marriage is not how we’re used to doing things!”

I see. Because if we have learned anything from centuries of human progress, it’s that our society always stays exactly the same and never, ever changes. Which is why you’re currently reading this inside your cave by the decomposing carcass of a mammoth your tribe has stoned to death an hour ago.

My point is this: If your only argument against something boils down to “I’m not used to this concept, and change scares me,” I’m sorry, but you don’t really have a strong case.

And then I opened my Facebook earlier today to see this: 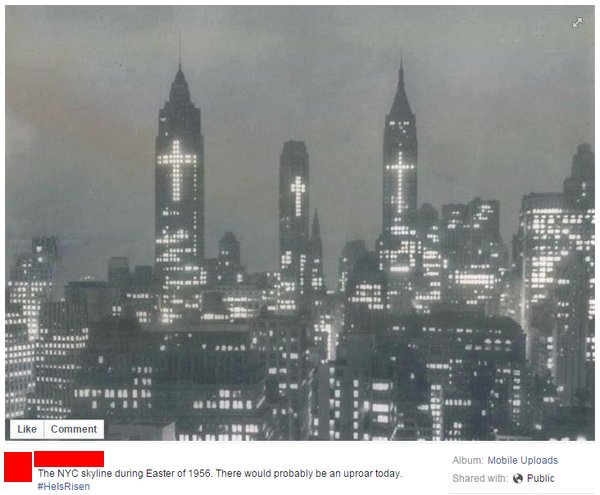 Granted, the poster originally published the photo in early April, so his intention was not to comment on the Supreme Court ruling. But here are some recent comments on that post:

See? Gay people didn’t just want equal marriage rights. There’s been a secret gay agenda all along, which involved sneakily replacing all crosses with rainbows and repainting history with skittles. Or something. I don’t know, I didn’t get the memo.

While the above examples are some of the more extreme, the general consensus in the comments is that 1956 was a much better time for all of us, but then the liberals came and fucked everything up with their political correctness and “progressive” thinking. There’s mass nostalgia for an innocent time long gone.

That’s interesting. Wanna see another photo from 1956? Because here’s one: 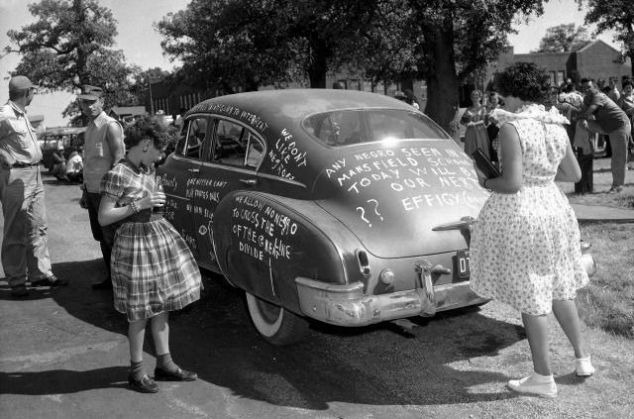 A privileged group of people passionately protesting a ruling that gives minorities equal rights? I wonder what that reminds me of….

Ah, the good old days, when one could freely write “We don’t like negroes” and threaten to burn them without the fear of being persecuted by those politically correct liberals. In January that same year, Martin Luther King, Jr’s home was bombed, but at least we could display crosses on buildings for Easter.

Or you could be one of these people:

The choice is yours.

6 thoughts on “Fuck off with your selective nostalgia”