Bornholm is a small Danish island that I assure you is a real place that actually exists. It even has a history and everything:

The island is said to have been an important trading post back during the Viking times. From 1525 to 1576, Bornholm was pawned to the city of Lübeck, which is apparently a thing you can do with islands. Bornholmers weren’t too happy about that, so they revolted but were violently suppressed in the battle of Ugleenge (Danish for “the ugly English.” Probably).

In 1645, Sweden fought Denmark and took control of the island, but then the Swedes were immediately like, “Nah, we didn’t even really want it, so you keep it, Denmark,” and just up and left. In 1658, the Treaty of Roskilde gave Bornholm to Sweden once again. That same year, Bornholmers revolted and shot Swedish commander Johan Printzensköld. They then gave the island as a gift to King Frederick III, which is apparently another thing you can do with islands. Their gift came with one condition, though. I quote: “Dude, seriously, please just stop cedeing our island to all these foreign powers every time they come around, you giant pussy.”

And Bornholmers lived happily ever after…

Until the Nazis came in 1940 and were all, “Zeez ist military lookout post und listening station now, ja?”

But in 1945, the Soviets were like, “Niet, comdrade!” and bombed the shit out of Bornholm and the German forces stationed there. The Nazis surrendered. The Soviets left in 1946, but under one condition, though. I quote: “We go home now, but only Denmark is allowed to keep soldiers on the island. If we see any other Western military here, we’ll consider it foreign occupation and be forced to protect the rights of Bornholm’s Russian-speaking population by sending Soviet paratroo…uh…no, by politically supporting local Bornholmer rebels in their right to self-determination – ha ha, you almost made us reveal our clever clandestine plans!”

Nowadays, Bornholm is a picturesque island with a population of just under 40,000. There are few, if any, revolts and murders of foreign military commanders. There are, however, lots of fisheries, tourists eating fish, and a popular fictional troll, Krølle-Bølle, who steals said fish. At least that’s what most of his depictions lead me to believe. There’s even a life-size cardboard poster of Krølle-Bølle with his face cut out, so that obnoxious tourists can pretend to be the troll. Like this fucking guy: 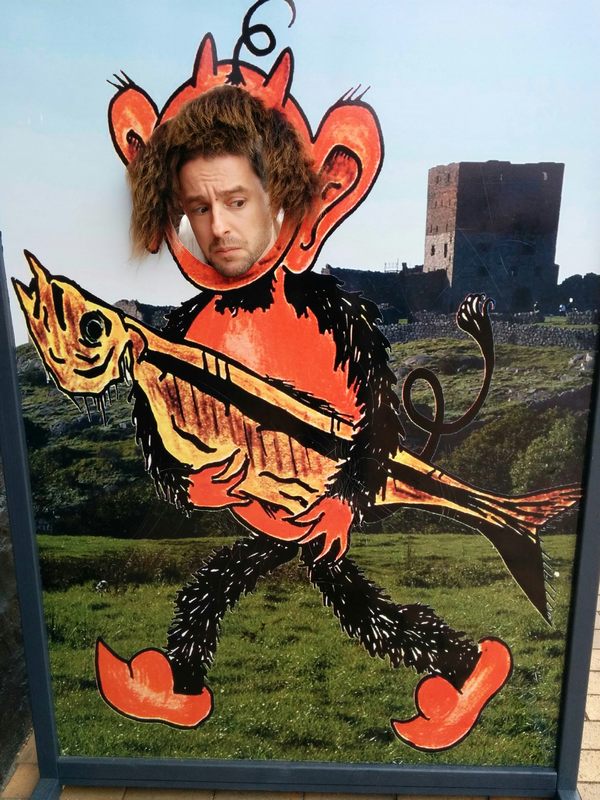 We’re living in a summer house on the northern part of the island and slowly exploring the area around us via short daily expeditions. Saturday, we set sail for mainland Denmark.

You now know more about Bornholm than you ever thought you would. Until we meet again, here’s a totally innocent picture I took of a guy sunbathing:

You have a dirty mind, dear reader. I’m embarrassed on your behalf.