Lately, the name “David Wolfe” has been popping up in my Facebook feed with alarming regularity.

In case you haven’t heard of him, David “Avocado” Wolfe (yup, “Avocado”) is a self-proclaimed nutritionist and health guru. According to his own website, he’s the “rock star and Indiana Jones of the superfoods and longevity universe.” So he’s a fictional archaeologist who’s really good on the drums, I guess?

He’s the man behind this viral gem:

Yeah, David Wolfe believes that the evil health industry is withholding a readily available cure for cancer in order to profit from a sickly, unproductive population. Never mind that “cancer” is an umbrella term for a whole range of abnormal cell growths that arise in different parts of our body and often have vastly different symptoms and treatments. Nope, there’s apparently a magic CancerBeGoneTM pill locked up in a vault somewhere.

I’m not the first or the second or even the 171st person to be rubbed the wrong way by David Wolfe’s pseudoscientific paranoia about mainstream health and food industries, which he uses to peddle his own wares like expensive fruit juicers and all-natural beauty products. He’s essentially the dietitian equivalent of conspiracy theorists that (ab)use your healthy skepticism to further their own agenda.

But I’m not here to talk about his snake oil salesman routine. The two articles I’ve linked above already do that in great detail. I’m here to warn you about the very real, physical danger David Wolfe poses to your health:

David Wolfe causes brain cancer, and I’m about to prove it.

What prompted me to write today’s post is this fearmongering article by Dr. “Avocado” himself:

“These hyper-exaggerated claims were found in this quack article!”

David Wolfe’s article talks about a study that found cocamide diethanolamine (cocamide DEA) in 98 different shampoos and other care products. That part is true; the rest of the article is either wildly speculative or pure bullshit.

Take the two claims in the headline. Namely, that cocamide DEA is both illegal and cancer-causing.

David Wolfe throws the word “illegal” up there, because “illegal = clickbait = traffic = profit.” He never speaks of the legality issue again. For the life of me, I can’t find any evidence of cocamide DEA being illegal. It’s a foaming and emulsifying agent used in bath products. It’s not currently found on any list of banned substances. Here’s what the FDA says about it:

FDA believes that at the present time there is no reason for consumers to be alarmed based on the use of these substances in cosmetics. However, consumers wishing to avoid cosmetics containing DEA or DEA-related ingredients may do so by reviewing the ingredient statement that is required to appear on the outer container label of cosmetics offered for retail sale to consumers.

No occupational exposure limits or recommended guidelines for maximum safe levels in drinking-water have been established for coconut oil diethanolamine condensate.

So, unless there’s solid evidence that comes from elsewhere than David Wolfe’s overactive imagination, I think it’s fair to conclude that cocamide DEA is, for the time being, legal.

“Legal shmorshmigal,” you may say (if you’re a toddler), “it still causes cancer, so David Wolfe is right!”

But is the “cancer-causing” label appropriate?

The cancer claim at least has some basis in reality. Cocamide DEA is classified as “possibly carcinogenic to humans” by the International Agency for Cancer Research. It’s in Group 2B on this list:

As we can see, it’s a whole scale ranging from “this will almost certainly give you cancer” to “you can probably inject this directly into your eyeballs and still be healthy.” (Disclaimer: I do not in any way condone people injecting stuff into their eyeballs.)

For further clarification, let’s turn to IARC’s own definition of “Group 2B” agents:

To translate to human: “There’s enough data to suggest there might be a link to cancer, but we cannot (yet) definitively say whether it’s actually going to murder your face.”

David “I-named-myself-after-a-fruit” Wolfe also mentions that cocamide DEA is on California’s Proposition 65 list of substances linked co cancer. Formally “The Safe Drinking Water and Toxic Enforcement Act of 1986,” the proposition focuses mainly on protecting the state’s drinking water. It’s kind of right there in the name.

Proposition 65 also dictates that if a product exposes people to more than the defined safety limits of a listed chemical, the company must add a warning label. From the Proposition 65 FAQ:

Q. What is the acceptable concentration in my product for chemicals listed under Proposition 65?
A. Proposition 65 applies only to exposures to listed chemicals. It does not ban or restrict the use of any given chemical. The concentration of a chemical in a product is only one part of the process to determine whether consumers must be warned about an exposure to a listed chemical.

So finding cocamide DEA in shampoos is less of a SHOCKING revelation of CRIMINAL activity that will give you ULTRA-DEATH and more of a “business as usual,” as long as products are labelled accordingly.

Now, I’m sure many of you will find the fact that cocamide DEA is a possible carcinogen more than enough to stop using it. In fact, so would I. Better safe than sorry, right? But I think we can all agree that calling it an illegal, cancer-causing substance is a far cry from reality.

A more accurate headline for Avocado’s article would be:

But that doesn’t sound quite as catchy, does it? It won’t help you sell that Seabuckthorn Shampoo from Longevity Warehouse, will it, David? That’s a real item David promotes in the article, by the way.

The pinnacle of meaningless word salad David Wolfe uses to manipulate his readers is this:

“The one thing most of those names [like cocamide diethanolamine] have in common is that they sound dangerous. I’m not even entirely sure how to pronounce most of them.”

David Wolfe thinks being terrified of big words is a good reason to be afraid of things those words are attached to. Makes perfect sense. I bet David Wolfe is also afraid of Solanum lycopersicum, Lactuca sativa, and—gasp—Oryctolagus cuniculus. What horrors lurk behind these dangerous words?! Let’s see: tomato, lettuce, and—gasp—a bunny rabbit, respectively. David Wolfe is a raw food advocate that can’t eat lettuce because it sounds scary. Logic has no place in his world.

This brings us to the main claim of my article: David Wolfe causes brain cancer.

It’s simple. Let’s look again at Group 3 on our list of potential carcinogens:

This group contains agents and substances that are “not classifiable as to [their] carcinogenicity to humans.” Notably, “agents that do not fall into any other group are also placed in this category.” 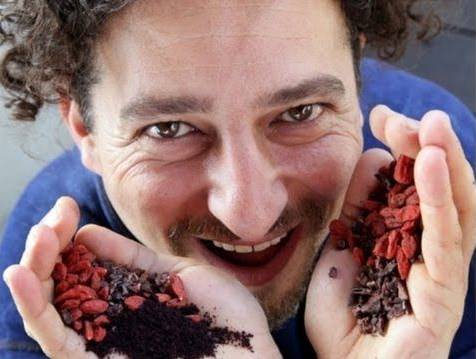 It’s fair to assume that no clinical trials or other scientific studies have been performed to establish a possible link between David Wolfe and cancer. As such, David Wolfe falls neatly into IARC’s Group 3. His carcinogenicity to humans is not classifiable.

According to the classification of potential carcinogens used by the International Agency for Research on Cancer, David Wolfe is a “Group 3” agent

Now let’s add a bit of fear and paranoia:

David Wolfe is found on IARC’s list of potential carcinogens

Most people absorb David Wolfe’s writing through their eyes and use their brains to attempt to process it. Because of that, it’s safe to conclude that David Wolfe’s readers will develop brain cancer through prolonged exposure to this illegal carcinogen.

Still not convinced? How about the fact that the name David “Avocado” Wolfe is legitimately terrifying?!

First off, the Ancient Greek spelling of “David” is “Δαυίδ.” Scary!

Second, one of the binomial names for “Avocado” is “Persea paucitriplinervia”

Finally, you might have missed it, but “Wolfe” sounds suspiciously close to “wolf,” a large carnivore that’s been known to attack humans.

I can barely pronounce that, and it certainly sounds dangerous as shit! Would a man who’s healthy and not dangerous to your brain have a name like that?!

If I were you, I’d stay well away from David Wolfe and his brain-destroying carcinogens.