This morning, as I left my apartment, I bumped into an upstairs neighbour whom I’d never met previously. He was carrying his baby daughter downstairs. I joined them on the staircase just outside the apartment. As we neared the front door he turned to me and said: “Is it OK if I ask you for a favour?” I figured he needed me to open the door for him, seeing how his arms were occupied with the whole baby-holding business.

I nodded, at which point he said the following:

“I’ve left the stroller in the apartment. Do you mind holding my daughter for a few moments while I run upstairs and get it?”

For a second I wanted to mess with his head by rolling my eyes wildly in their sockets, exclaiming “Yes! Yeeeesss! We would love to hold our precioussss!” and laughing maniacally. Instead, I calmly took the girl from him and held her for a minute or two until the father returned with the stroller. Boring, I know. He thanked me and we all went about our day.

As I continued my journey to work I started thinking, which is an activity I don’t really enjoy, yet am forced to engage in more often than I’d like. I thought:

“Wow, that’s a pretty brave guy. Handing his daughter to a complete stranger, with no witnesses around. Sure, I appear to be his downstairs neighbour, but what if I’m just a guest of his actual neighbours? What if my exact plan is to hang around apartment buildings waiting for hapless parents to forget their strollers? An extremely ineffective plan, but what if? What an irresponsible father, handing his baby over to a random, even if dashingly handsome and silky-voiced, man!”

Photo of me, censored by the “Too Hot To Be Seen” committee.

Immediately following that, I thought:

“Wait a second? Why should this be so weird? Can’t a human being trust another human being with a third mini human being anymore? How did we become a society where being paranoid, cynical and mistrusting of others is the norm? I’m sure some people would crucify this man for leaving his child alone with a stranger, but why? Is he wrong to assume other people are decent? Isn’t this a bit of a heavy subject matter to mull over on a train to work? Get a life, Daniel!”

And immediately after that:

“That may be true, but would I leave my yet-unborn hypothetical child with a random person in this situation? Hell no, I wouldn’t even leave my child alone with myself. I tend to drop things, like, all the time! What was he thinking?”

This internal monologue continued until the moment I caught everyone on the train staring at me and realised I had been wrong about the “internal” part at the beginning of this sentence.

What I’ve learned from the thought exercise is this:

1. I can’t make up my mind on any issue that extends beyond picking a type of bread to make my sandwich with.

2. I should probably consult somebody about that whole “talking to myself in public” thing.

3. This is too divisive a topic to be adequately explored by a man playing Devil’s advocate in his own head for five minutes.

What do the rest of you think? Would you be OK with a stranger looking after your child in this situation? Is the father the embodiment of all evil? Is this even worthy of discussion? Most importantly: is Daniel a dashingly handsome and silky-voiced man?

Idioms are great. Whenever you want to convey something, but are too lazy to form your own sentences, you just whip out an idiom and it’s all crystal clear. Easy as pie!

Nevertheless, idioms aren’t always straightforward. Some idioms make perfect sense. For example, it’s, like, so easy to take candy from a baby! I could literally do it with my eyes closed. Seriously, babies have really shitty motor skills, all you have to do is just wait until they drop it.

Yet some idioms use comparisons that seem really far-fetched, or just pure wrong. Let me complain about those for a while.

Side note: Yes, I know that most idioms have clear origins and explanations. I too have access to the Internet and know how to type. All I’m questioning is their relevance and usage in an average conversation. Also, shut up, nobody likes a smart-ass. Which is why I have so few friends…now you’ve made me depressed.

What?! How do you even tell if a clam is happy? Do they smile? If they do, holy crap that’s creepy! For this reference to really hit home we have to assume that clams on the whole are happier than most other living things. Who surveyed the clam population to establish this fact? More importantly – can I have their job? 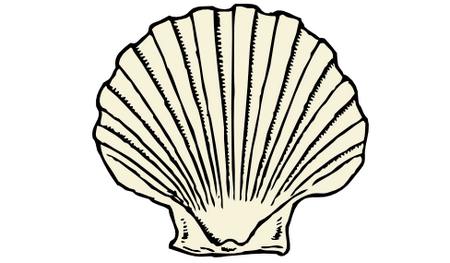 Aaaaw just look at him! So happy and peaceful!

3. Cool as a cucumber

That’s right, we all know cucumbers are smooth operators. I dare you to try scare a cucumber and see what happens. Nothing is what happens! It’s a freaking vegetable, it has no ability to show emotion. If “cool” refers to temperature, then how did someone come up with this specific comparison? Are cucumbers notoriously poor conductors of heat? Because I’ve never heard anyone say “This man is having a heat stroke. Quick, beat him with cucumbers!” On a side note, I think I’ve just inadvertently invented a new reality ER show that I’d be more than willing to watch.

I sort of see the logic here. Door-nails don’t move or breathe, just like dead people. You know what else doesn’t move or breathe? Literally any inanimate object you can find. Your table? Dead! Your toothbrush? Dead! Your bed? So very dead! You’re surrounded by death, yet you go on about your business, oblivious to those poor door-nails and their struggles. What kind of monster are you?!

Holy shit! Really?! Have you ever seen a baby before? That analogy is on par with “healthy as a multiple gunshot victim”.

If you’re trying to talk about how great you’ve slept babies are definitely the last thing you should be bringing up. Try comparing your sleep to something more calm and reserved. Like a cucumber, or something.