7AM. Rise and shine. Or, rise, slither out of bed onto the floor and crawl to the bathroom. Then slide down for some food. The hotel’s breakfast buffet is quite varied. There’s a lot of fresh fruit, banana and mango pancakes, various western and Vietnamese dishes and, of course, Cà-Phê (with fresh milk, no less).

After breakfast we pack our bags and take them downstairs. Here we check out and leave the luggage at the reception to be picked up after our My Son trip. A mini bus picks us up, along with some other tourists, and we set off to My Son.

Our tour guide is an entertaining fellow and constantly tries to make jokes. He delivers a lot of unintentional comedy, because he chops his words and has a heavy accent. He also has a habit of repeating parts of, or even whole sentences. A few of his verbal gems include “the area belonged to the Cham people, the Champa-people” and “some of you are going bus-by-bus and some are bus-by-boat, bus-by-boat”. Here he’s referring to there being two groups of people: one group will be going back by boat, while the rest of us will be on the same mini-bus. 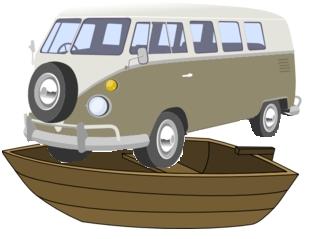 Upon arrival to My Son our guide grabs my helmet and puts it on (OK, this helmet is way more popular with people than it should be). He wears it while going up to the ticket booth and buying entrance tickets for all of us. He gives a brief salute to the whole bus and then hands the helmet back to me.

My Son is a rather small site and only very few buildings are still intact. Even these intact buildings are mostly damaged after years of erosion. The surrounding area is absolutely stunning, with lush forests and mountains stretching out as far as I can see (which is quite far, seeing how I’ve got 20/20 vision and it’s a clear and sunny day).

Our guide tells us that there are two main reasons why the Cham people have built the temple site exactly here:

1) There’s a big mountain nearby. “My Son” actually means “Beautiful Mountain” and is (surprise) named after that mountain.

2) There’s a stream that runs through the site, which the Cham crowd used for making “holy water” for their worship ceremonies.

The guide insists on making us listen to his rather clumsy explanations of the site’s remaining structures, before he finally lets us explore on our own. So that’s what we do, with all the cultural sensitivity that… 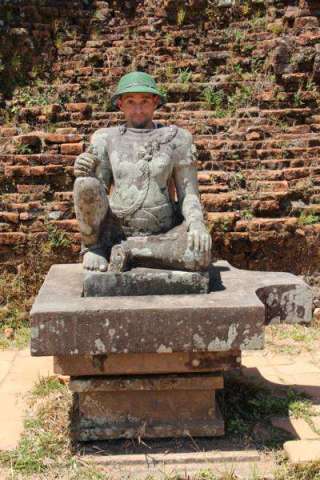 Yes, that’s exactly the purpose for which they were built

And with respect to the…

Anyways, we spend the next hour exploring the temple site and taking pictures.

Now I know what you’re thinking, but it’s actually just a phallic symbol

At 11:00 there’s supposed to be a half hour dance show. We’re still exploring the site when we hear the show start, so we make our way back to the small outside stage by the entrance. We arrive at 11:15 and catch a grand total of 10 seconds of the show (hey, that’s cheating!). The dancers pack up and leave and we head back to the minibus. The drive back is uneventful. Most of us doze off until we get to the hotel. Here Katka and I eat a quick lunch and await our cab to Da Nang.

We arrive to the train station in Da Nang well before departure time. Since our train is also 30 minutes delayed we spend over an hour in the by-now-familiar environment: a waiting room with way too many people and way too little air conditioning.

When the train finally arrives we climb into a shabby-looking seater carriage. Some of the seats in the carriage are tilted all the way back, with no visible way of getting them into an upright position. Both of our seats are “luckily” in that category. Well, still an upgrade from yesterday’s plastic chairs! We settle in for a 5-hour ride to Dong Hoi.

I fail to fall asleep due to a few constantly coughing passengers and a horde of children running around and screaming (or was it just one kid?). By the end of the trip I develop a headache and feel tired and grumpy. We buy two train dinners, each consisting of a lot of rice, a chicken leg and some salty cabbage.

We arrive to Dong Hoi around 21:00 and take a cab to Nam Long Hotel, recommended by Lonely Planet. We’re greeted by a girl of around 12, manning the reception by herself. “You want a room?”, she asks in good English. When we answer affirmatively she makes a phone call (presumably to her mom, who runs the place).

After hanging up she tells us there’s a room for 15 dollars, including breakfast. This sounds pricey compared to what the book says and also considering that we’re here during the low season. However, I’m not about to engage in a price negotiation with a 12-year old (how will I ever live with myself if I lose?).

The girl walks us upstairs and chats with us in pretty fluent English. The room is by far the worst we’ve seen in Vietnam until now. The furniture has a worn out and cheap feel. There’s no phone or Internet, but there’s a colony of (hopefully friendly) ants living by a pipe in a tiny bathroom.

There’s something that looks like a window. Upon closer inspection we discover it to be an opening in the wall that is shut tight by two non-transparent sliding bars. These make awful horror-movie-inspired screeching noise when we attempt to open them. Through the tiny opening that we manage to make we’re treated to a magnificent view of…the wall of the building across.

We’re here on a one-night stopover, so we don’t care. Katka heads downstairs to talk to the hotel owner about train tickets to Ninh Binh, breakfast and other practicalities. In the meantime I befriend a few ants and drag my grumpy and tired self to bed.

For now, visit Katka’s Flickr for some great pictures from the Vietnam escapade.