This is another entry for the flash fiction challenge at Dude Write.

The rules are, as always:

1. I have to use the given prompt 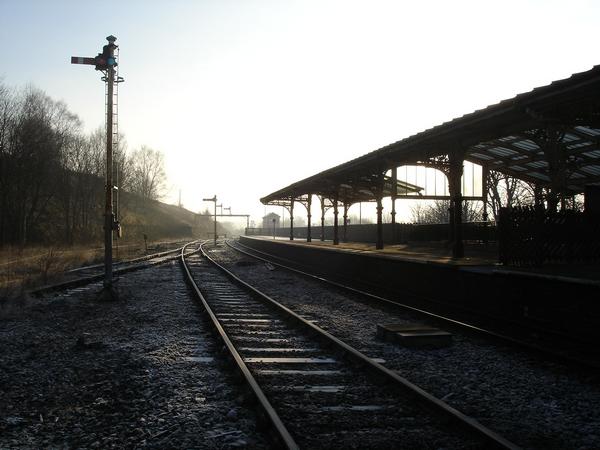 Jack looked at his watch. Seconds were slowly creeping towards seven in the morning.

The money train would pass by the station at exactly 7:13. Just like it did every morning, week after week. Jack knew. He’d been watching. Calculating. Plotting.

Dry autumn leaves crumbled under his feet, as Jack paced impatiently along the tracks, trying to find the perfect spot for his ambush.

Today he was going to buy his freedom.

Jack lived in poverty for as long as he could remember. He’d stolen his first wallet at the age of 10. His steady descent from pickpocketing to bank robberies had only been punctuated by periods of incarceration. Today would change it all. No more living in and out of prison. No more money troubles.

After today he’d be a free man.

The money train didn’t have a scheduled stop at this station, but Jack would bring it to a halt. His plan was foolproof. He wouldn’t fail.

The location was perfect too. No residential buildings nearby. No witnesses. There’d be no people at the station at this hour. Passenger trains didn’t start running until well after 8 o’clock. The train tracks curved sharply away from the platform, so the train driver would have no chance of seeing Jack until too late. He’d have no time to sound the alarm.

7:08. The sun was crawling up through the cloudless sky. Jack stared into its weak September rays and smiled. This was surely a sign. Everything would go according to plan.

Jack recalled her last venomous words, thrown at him from behind a slammed door. “You’ll never amount to anything. You’re a coward!” she yelled. A coward! Ha! Let’s see what she’d have to say about him after today. Jack had been doing her bidding for far too long. He’d stolen anything she ever asked for. He’d threatened people’s lives, just so she could wear another pretty trinket. Because of her he’d served two years in prison. When he returned she slammed a door in his face and called him a coward.

Well, today wasn’t about her anymore. No, now he’d only be taking care of himself. Jack smiled again. He already felt free.

At 7:12 the railway signal turned green and Jack heard the faint whistle of the approaching money train. He walked calmly to his chosen spot on the tracks and lay down on his back. The train’s whistle grew louder as it sped towards the platform.

Jack glanced up at the sun once more and offered it his last smile.

The smile of a man truly free.